Another weekend is upon us. It is actually a long weekend for me as I took off work today to take care of some personal business. I started out with my early morning walk and then got my car serviced. Then it was a trip to the retirement office to start some paperwork. I am seriously considering retiring my the end of the year so it is time to get some straight facts about my pension amount, cost of insurance and numerous other details. This was followed by a quick shopping trip to pick up essential items. That filled the morning so in the afternoon I pampered myself with a nap.

I had an appointment with the optometrist last week and I needed a new eyeglass prescription. My insurance only pays for new frames every two years. I had gotten new frames last year  so I had to wear my old glasses for a week while the new lenses were being put into my frames. Everyone who wears glasses can likely identify with the difficulty of wearing an outdated prescription. Reality just does not look the same. I work on a computer for a great part of my job and it is much more difficult when your vision is somewhat hampered. Some people I know get headaches when their glasses are not right. Fortunately I do not have that problem.

I did have a problem some years ago when I got my first pair of bifocals. My eye doctor had warned me that it would take some time to get used to them. I experienced nausea and something akin to motion sickness. I was taking motion sickness pills constantly. After a couple of weeks I decided I was never going to get used to them so I went back to my eye doctor. It turned out that one of the lenses was put in the frame slightly crooked so the bifocals line was not straight. The dizziness was caused by looking through the crooked bifocals. If I had gone in much sooner I would have been spared several weeks of that ill feeling, but I had taken to heart the doctor’s advise that it would take time to get used to them and I was giving them a chance.

This week when the doctor’s office called me to let me know my glasses were ready I could not get out of my office fast enough to pick up the glasses. It was such a great feeling when I put the glasses on for the first time and could see clearly again. I have actually become less near-sighted over the last couple of years so this is a weaker prescription than my last one. I also have the start of cataracts that are not yet a problem but the doctor will keep watching them.

With my vision issues this week I was not able to spend much time reading or cross stitching. I hope to catch up on both over this weekend. 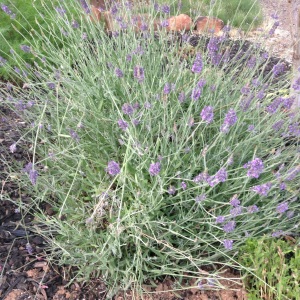 The weather has remained relatively cool so far. We have had very few days where the weather has been what I would call hot. Since I am more of a cool weather person I am very happy with that.

In the garden the lavender is looking really good. The first buds have appeared on our cosmos.

We are having a problem with squirrels. They are cute to watch but they are destructive. Since we have lived here we have always had a small problem with squirrels but the squirrels and the problems are more numerous this year. They eat out of our bird feeders so we have had to do some creative engineering to keep them away. They previously ate some basil and other herbs. They have eaten all the leaves off the sweet potato vines that are in our planters, essentially destroying them. Today we discovered that they had eaten all of the morning glories that my sister had planted. In the past we have used a commercial product that repels animals but with relatively wet weather the product has been ineffective since it washes away. We also used red pepper flakes but our squirrels are not deterred by them

Hoping everyone has a good weekend and may you keep your squirrels at bay!

It is not down in any map; true places never are.